On February 19th, nearly 450 of L.A.’s most philanthropic women joined together at the Beverly Hills Hotel for The Jewish Federation’s Sylvia Weisz Women’s Campaign annual Chai/Emerald/Zahav, Ruby & Lion of Judah luncheon, one of the most anticipated events of the year. This dynamic gathering of leaders, philanthropists and friends inspires such warmth and liveliness as the women unite, bound not only by their matching Lion pins, but by their shared commitment to our Jewish community.

In a ballroom bursting with excitement and energy, over $3 million was raised in support of our Federation’s life-changing work caring for Jews in need, engaging with the community and ensuring the Jewish future.  This year’s celebration honored community leaders Sharon Janks and Virginia Maas, and featured a keynote by Randi Zuckerberg, the founder and CEO of Zuckerberg Media.

Accepting the 2014 Lea Rabin Award, given each year to a woman who represents the highest standard in leadership, Sharon Janks reminded us all of the inspiring quote: “Be the change you wish to see in the world.” She spoke about how being active in the community defines who she is at the very core, and we couldn’t agree with her more.

Virginia Maas, recipient of the 2014 Ruby Award for her achievements in Women’s Campaign leadership roles and a strong commitment to community service, talked about how she forged a powerful bond with women through her involvement with our Federation. She also paid tribute to those women who are no longer with us today, whose leadership she once admired and strives to emulate. Congratulations again to both Sharon and Virginia!

Experience the event for yourself by checking out photos of many of our attendees:

Heidi Monkarsh, Chair of the Sylvia Weisz Women’s Campaign, made a heartfelt case for giving, speaking fervently about our Federation’s work in young adult engagement, from the growth of YALA (Young Adults of Los Angeles) to our recently launched Community Leadership Institute, neither of which would exist without the incredible generosity of donors like the distinguished women in the room. She also presented our Federation’s new “I Am the Federation” video, featuring faces of the diverse people whose lives we have touched. The funds raised after the video was shown will no doubt make a powerful impact on the lives of many within Los Angeles, Israel and around the world.

After lunch, Randi Zuckerberg shared lively anecdotes about her Jewish journey, such as how she once found herself unexpectedly singing in front of Elie Wiesel, and how she wrote her book Dot Complicated after being told that one of her son’s friends thought his grandfather, whom he often Skyped, lived in the computer. She also shared her enthusiasm for Israel. Having recently led a group of technology CEOs on a transformative journey to the Holy Land, she is surprised that many Jews can imagine modern Judaism without Israel. She considers Israel the headquarters for Judaism; in her opinion, those of us in Los Angeles and other cities around the world are living in “satellite offices.” Randi’s belief is that young American Jews should stand proudly for Israel—and by the sound of the applause after her remarks, it is clear that the Lions agree.

She also discussed her unique and unexpected path from Harvard graduate to Facebook executive to author and digital media mogul. Based on a leap of faith, a free plane ticket and her brother’s passion for social media, she left a burgeoning New York career behind for a life in California. She didn’t take this decision lightly, however, as her boyfriend at the time had just turned down his dream job in San Francisco to stay with her on the east coast. Fortunately, he joined her for the journey west, and the two later married and had a child. Randi credits their Federation-funded Birthright Israel trip for strengthening their bond to one another before their big move.

At the conclusion of her speech, Randi, who once hoped to be a cantor, shared with us a beautiful rendition of Debbie Friedman’s L’chi Lach. You could have heard a pin drop when her voice filled the room, and it was a fitting way to end our program. She is a true inspiration, a woman to admire for her Jewish pride as well as her career prowess—but boy, did the world miss out on one great cantor!

For more information about the luncheon or our Women’s Campaign, please contact Karen Sternfeld at KSternfeld@JewishLA.org  or Leah Kitz at LKitz@JewishLA.org. 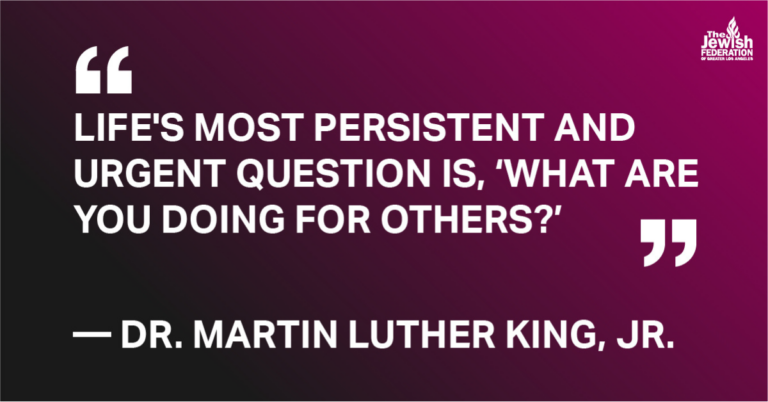 Ways to Serve Your Community on MLK Day 2023