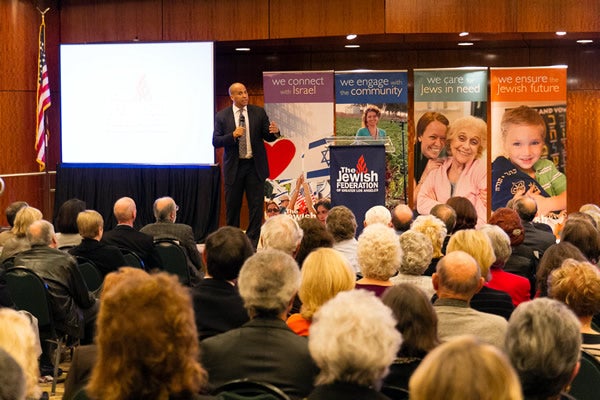 Did you feel the energy last week?  It was the incredible Mayor Cory Booker!  Speaking at our Federation’s year-end campaign event at Sinai Temple, Mr. Booker thanked 400 of our donors for their generosity and reminded them that their participation is critical to the success and growth of the community.

Mayor Cory Booker, Mayor of Newark, New Jersey, is a nationally-recognized change-maker whose commitment to the Jewish community is inspiring to all who hear him speak. During his remarks, Mayor Booker professed his love for the Jewish people and his gratitude for teaching him partnership, community, and building bridges.

Mayor Booker is a student of Torah and beautifully emphasized his points with Hebrew text; including references to the week’s parsha about Joseph.  He also spoke passionately about the ties between the Jewish and African-American communities and how much we need each other.  Again, quoting Hebrew text, he reminded the audience that the memorial plaque at the Lorraine Motel, where Martin Luther King, Jr. was killed, bears the Hebrew text, “They said one to another, behold here cometh the dreamer… Let us slay him… And we shall see what become of his dreams (Gen. 37: 19-20).”

Donors had the opportunity to ask questions and Mayor Booker was gracious with his time and patience.  The event took place the night before he was to embark on his SNAP challenge to eat a week’s food with only what he can purchase with food stamps.  This is just one example of how Mayor Booker takes on an issue and wants to learn through the experience.  Since he was at a Jewish community event, it was not surprising when he told us that one woman came tonight and brought him a bag of food!

During the evening, we also heard Jay Sanderson, our Federation’s President & CEO, share his insights and first-hand experiences from his visit to Israel during the recent conflict. It was truly an inspirational evening that our community members won’t soon forget.

The Honorable Cory A. Booker, Mayor of Newark, New Jersey, took the oath of office in 2006 following a sweeping electoral victory, and was re-elected for a second term in another overwhelming majority in 2010. Mayor Booker has a strong and longstanding connection to the Jewish people that began when he met Rabbi Shmuley Boteach. He believes that the problems confronting our cities, the Jewish community and the world can be solved by joining forces with others. Named one of the 100 most influential people of 2011 by Time and lauded as a change-agent to watch, Mayor Booker is fulfilling Newark’s mission to set a national standard for urban transformation by marshaling its resources to achieve security, economic abundance and an environment that is nurturing and empowering for individuals and families.