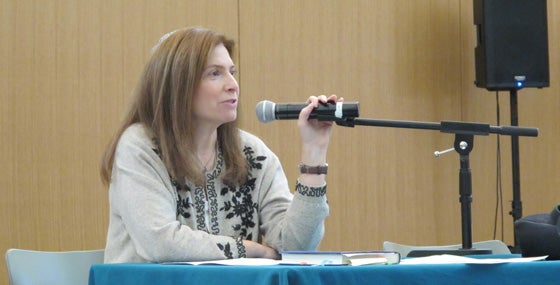 When will my life really begin? That was the question Rabbi Naomi Levy recounted asking herself, just as congregants asked when they sought her counsel, as the Board of Rabbis of Southern California and the Jewish Federation of Greater Los Angeles welcomed her to its Distinguished Authors Series on March 22 at Leo Baeck Temple.

Rabbi Levy, a member of the Board of Rabbis and spiritual leader of Nashuva, is the author most recently of Hope Will Find You: My Search for the Wisdom to Stop Waiting and Start Living, a memoir of the years of struggle she faced after learning her daughter had a potentially-fatal disease, Ataxia Telangiectasia.

Her audience of some forty rabbis listened intently as Rabbi Levy spoke of experiencing not a crisis of faith but a paralysis of faith. Despite all her training and gifts as a rabbi, for perhaps the first time in her life, she did not know what to say to God. She did not believe God gave the disease to her daughter, so she could not bring herself to pray for God to take it away.

“Rabbi Levy is one of our treasures,” said Rabbi Mark S. Diamond, Executive Vice President of the Board of Rabbis of Southern California. “She has the unique ability to turn her very personal challenges into inspirational teaching for the rest of us – both as rabbis counseling congregants and as individuals with our own private struggles.”

“One of my greatest mentors has been my daughter,” Rabbi Levy said. Noa provided the title for the book, and its deeper message as well, when she told her mother that we should stop looking for hope, because “Hope will find you.”

As Rabbi Levy told her audience, she had been desperately waiting for hope to come to her, waiting for her life to begin. Noa’s words gave her permission to relax and make room for hope to come in on its own. That, for Levy, is how we can overcome our own paralysis. “We all have the power to pray for the strength to overcome whatever we are facing, even those things we are sure will defeat us.”

As Noa herself said, during her Bat Mitzvah, in words that could surely be a motto for the Jewish people, “God can be with us and watch over us, but it’s our job to help people who don’t have a fair life. They have no one else to take care of them except us.”