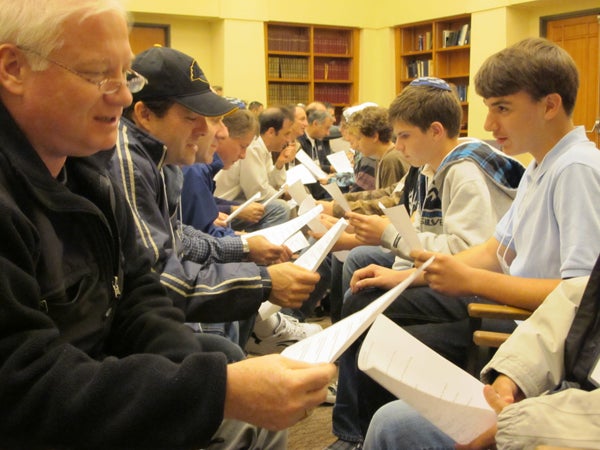 The weekend of October 29 -31, I was privileged to once again oversee the Federation’s annual “It’s A Guy Thing” Shabbaton at Brandeis-Bardin, which brings together 8th and 9th grade boys with their fathers or other male mentors. Designed to address the attrition of post-Bar Mitzvah boys from Jewish involvement, and form bonds between fathers and teen sons, the weekend combines physical activities, out-of-the-box religious services, and experiential education.

Created in 2007 by Rabbi Jon Hanish, a member of the Board of Rabbis Executive Committee, and Lori Port of the Jewish Federation, the program has been reshaped and often lead by Rabbi Hanish and myself.

This year’s theme was Relationships: Expectations and Responsibilities, using the weekly parsha Chayei Sarah as its touchstone. While we focused primarily on the father-son relationship at this uncertain and charged stage, we also dealt with relationships with mates, siblings, romantic interests, teachers, employers and employees, and the Jewish community.

The weekend got off to its usual blazing start Friday as the father-son pairs, under the guidance of the incomparable Gabe Goldman, lit Shabbat candles as the patriarchs might have: using flint, a rock and shredded bark. Following dinner and a spirited icebreaker, Rabbi Jon Hanish and I led all 53 attendees (with one set of twins) through a Speed Havruta, in which they discussed nine different pieces of Jewish text on relationships, for 3 minutes each, with a different partner of the other generation. Each father-son pair then came together and completed the sentence “ABOUT RELATIONSHIPS, OUR TRADITION TEACHES ________,” using only words culled from the provided quotes. Then it was off to drumming and a night hike.

Saturday began with a raucous tefillah – led by Rabbi Hanish and Rabbi Hal Greenwald of the Holy Land Democracy Project – intended to involve those uncomfortable or unfamiliar with religious services. I lead the Torah service, which combined Bibliodrama with a hike to an interactive Storahtelling performance, in which “Isaac” and “Abraham” debated their relationship, with contributions from fathers and sons, all in the context of Abraham sending his servant to find a bride for his son.

The culminating program was Saturday night. Fathers and sons broke into moderated open discussions about the expectations, wishes, desires, tensions, conflicts and issues they experience with each other. The hallmark of this program is that no father is grouped with his own son, and vice versa. This allows a truly “safe” space where each can benefit from hearing what their own son or father may not be expressing. The session is always a highlight for participants, and gives them valuable tools for opening communication with each other at home. One returning father even told me that both he and his son had hoped this session would be included again. 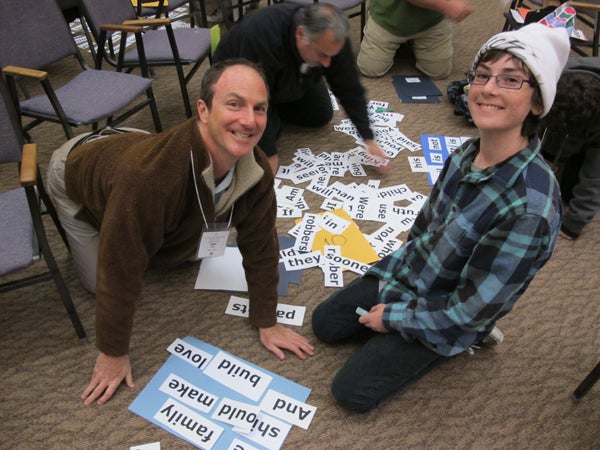 All these programs and sessions took place in a Jewish context, reinforcing Jewish values and connecting, however lightly, to Jewish texts – without turning it into a religious school outing.

On Sunday morning, fathers and sons wrote a contract promising to pursue at least three specific activities together in the following year.

This program remains a vital success. More than one father asked for a continuation of the Saturday night session, and for a father-daughter program. While these may fall outside the original mandate to reconnect post-Bar Mitzvah teens with Jewish life, such programs are a service to the Jewish community of Los Angeles and help further the Federation’s strategic initiative to ensure the Jewish future.

It’s a Guy Thing is A program of the Jewish Federation of Greater Los Angeles and the Board of Rabbis of Southern California.