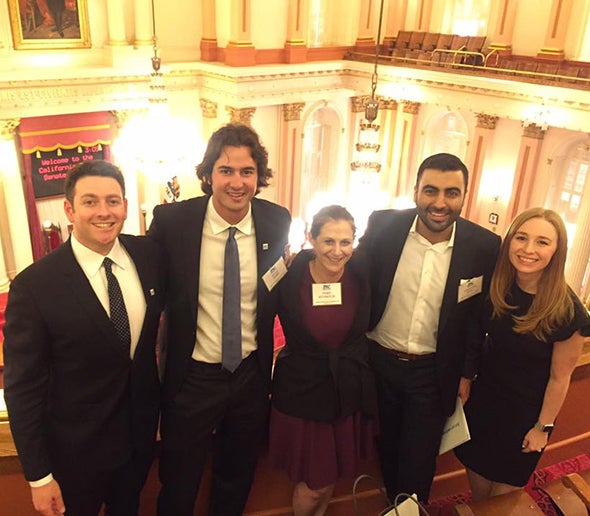 From a young age, my parents taught me the importance of tikkun olam — the Jewish concept of repairing the world. This lesson has consistently guided my choices as a member of the Los Angeles Jewish community, framed my Jewish identity, and is ultimately the guiding pillar that led me to apply to join The Jewish Federation’s Rautenberg New Leaders Project (NLP).

This year, as an NLP participant, I was excited to learn that not only would we have monthly sessions focusing on civic engagement and leadership, but we would also get the opportunity to put our skills into action by attending the Jewish Public Affairs Committee of California’s (JPAC) Advocacy Day in Sacramento, California on May 8 and 9, 2017. Although I spent three years living in Sacramento for law school, the opportunity to lobby never presented itself while I was a resident. When my participation in NLP enabled me to do so, I jumped at the chance to interact with California’s civic leaders and explore my former home city in a new and engaging way.

Prior to Advocacy Day, JPAC’s Association Director Julie Zeisler attended our monthly NLP session to go over the bills we had planned to advocate. Certain bills were specifically chosen by JPAC to overlap with Jewish values in the areas of immigration reform, child poverty, and non-profit security.

Once in Sacramento, Advocacy Day did not disappoint. From our initial reception surrounded by other Advocacy Day attendees to the final round of lobbying throughout the Capitol halls, I felt fortunate to engage with local California leaders both formally and informally, learn their views on California’s current political status, and hear their outlooks on other policy issues in and outside of their specific districts. It was an experience I won’t soon forget.

A specific highlight of Advocacy Day was listening to keynote speakers Secretary of State Alex Padilla and Attorney General Xavier Becerra, both of whom provided impassioned speeches noting the significance of California and its leadership during this confusing political climate. They reiterated the importance of lay leaders, like those attending JPAC, in assisting our legislators with making choices for California and the entire nation. Their speeches, followed shortly thereafter by our lobbying of various legislators at the California Capitol, left me invigorated about the future of our state and how my fellow NLP participants and I can engage civically in California.

Advocacy Day was a rewarding experience in what I’m sure will continue to be a wonderful year in NLP. This was my first time having my voice heard at California’s Capitol in connection to my Jewish identity — and I certainly hope it is not the last.

The Rautenberg New Leaders Project (NLP) is a premier civic leadership training program of The Jewish Federation of Greater Los Angeles, and has trained the next generation of LA Jewish leaders for over 25 years. For more information about NLP, please contact Aubrey Farkas at (323) 761-8163 or AFarkas@JewishLA.org.