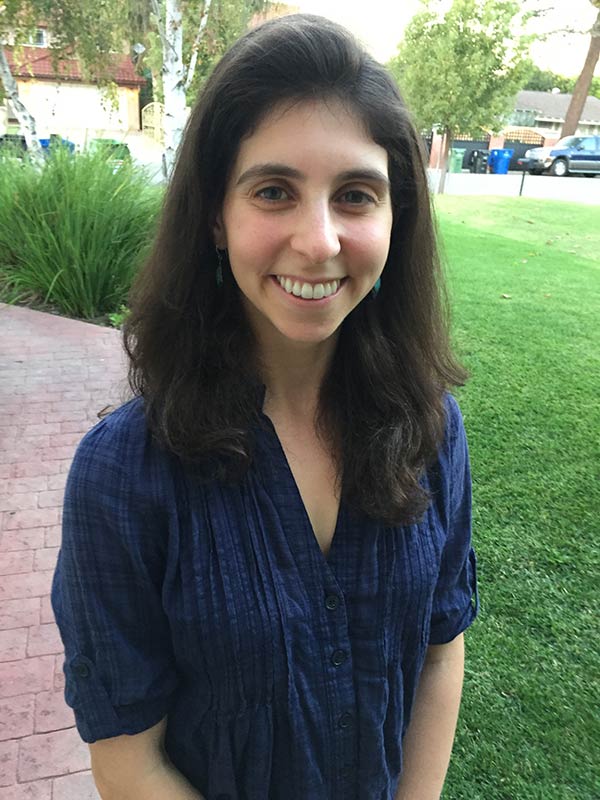 Rachel Wallace has worked with young professionals in the fields of international relations, Israel engagement, and foreign policy, and has worked closely with diplomats from around the world representing the Jewish people. Rachel is a current participant in The Jewish Federation of Greater Los Angeles’ Rautenberg New Leaders Project (NLP), engaging with elected, civic, and community leaders to address some of L.A.’s most critical challenges. She is also on the board of Jews Indigenous to Middle East and North Africa (JIMENA) and an alumna of NewGround: A Muslim Jewish Partnership for Change’s Fellowship, building ties between Muslims and Jews in L.A. Previously, she was a Staff Leader on the academic gap year program KIVUNIM: New Directions, leading her students around the world exploring Jewish life, government, and interfaith relations. She shares with us her impactful experience in the NLP program thus far.

It’s not every day that a group of young Jewish professionals attends a Sunday gospel church service and communion, yet this past Sunday, 16 Jewish young professionals participating in the New Leaders Project (NLP) represented The Jewish Federation in church. Many of us hardly attend synagogue, perhaps struggling to connect to its prayer, language, and Jewish ritual, or perhaps, are just not in the habit. Yet, this week, we were warmly welcomed into the West Angeles Church of God in Christ in the Crenshaw District of Los Angeles. NLP is a politically focused program that offers a deeper understanding of the diverse fabric of Los Angeles and access to elected, civic, and community leaders in an effort to address some of the most critical challenges facing our city.

As I pushed through the wide wooden doors to enter the church from the back, I was overwhelmed by the enormity of the structure. In front of me was a massive stage, surrounded by sections of pews arranged in a semicircle, stadium style. There was also an enormous cross positioned behind the preacher’s pulpit, with a multi-colored wall in the background. As I descended to my seat, I noticed two jumbotrons flanking the stage, mounted at the back wall to accommodate the 5,000 or so worshipers that typically attend services.

Given the venue, it was no surprise that the service was like a lively concert, with the choir centered on stage, and a keyboard player and high-tech sound equipment amplifying their voices. The choir was energetic and powerful, and congregants were swept up in song and dance waving their hands in the air, singing about Jesus, the Lord, and salvation. At times, I found myself clapping and swaying to the music along with the congregants and couldn’t help but wonder: if synagogues incorporated more song and dance into their services, similar to West Angeles and other churches, would they attract more congregants? Is this the answer to attracting more synagogue members, who may otherwise find services dull? Will song and dance inspire more congregants to connect to God spiritually while in synagogue?

As I peered around the room, I could not believe that the church was full, with congregants filling up both the lower and upper levels, immersed in the prayer and music. As I sat through the service, I realized it was not solely the vivacious prayer that attracted individuals to this church. It was also the warmth, hospitality, and friendliness. I was moved by the warm welcomes my group and I received. In addition to individual congregants speaking to us one on one, introducing themselves and their love for this church, the church’s Presiding Bishop Blake welcomed us from stage, introducing us as representatives of The Jewish Federation and NLP, and announced that our mission is to work with various communities to address key challenges facing L.A. Additionally, he introduced us as guests of Dr. Belinda Allen, Executive Director of the West Angeles Community Development Corporation (WACDC). WACDC is the social services arm of the church, with a mission to increase social and economic justice, demonstrate compassion and alleviate poverty as tangible expressions of the Kingdom of God through the vehicle of community development.

When I heard Bishop Blake introduce us, I was proud to be a part of the Federation. I was proud to represent the L.A. Jewish community and Federation as community builders and as a group that not only supports its most vulnerable populations, such as Holocaust Survivors, but also one that projects outward, actively pursuing coalitions with other minority communities with both similar and different histories, experiences, and religious connections. 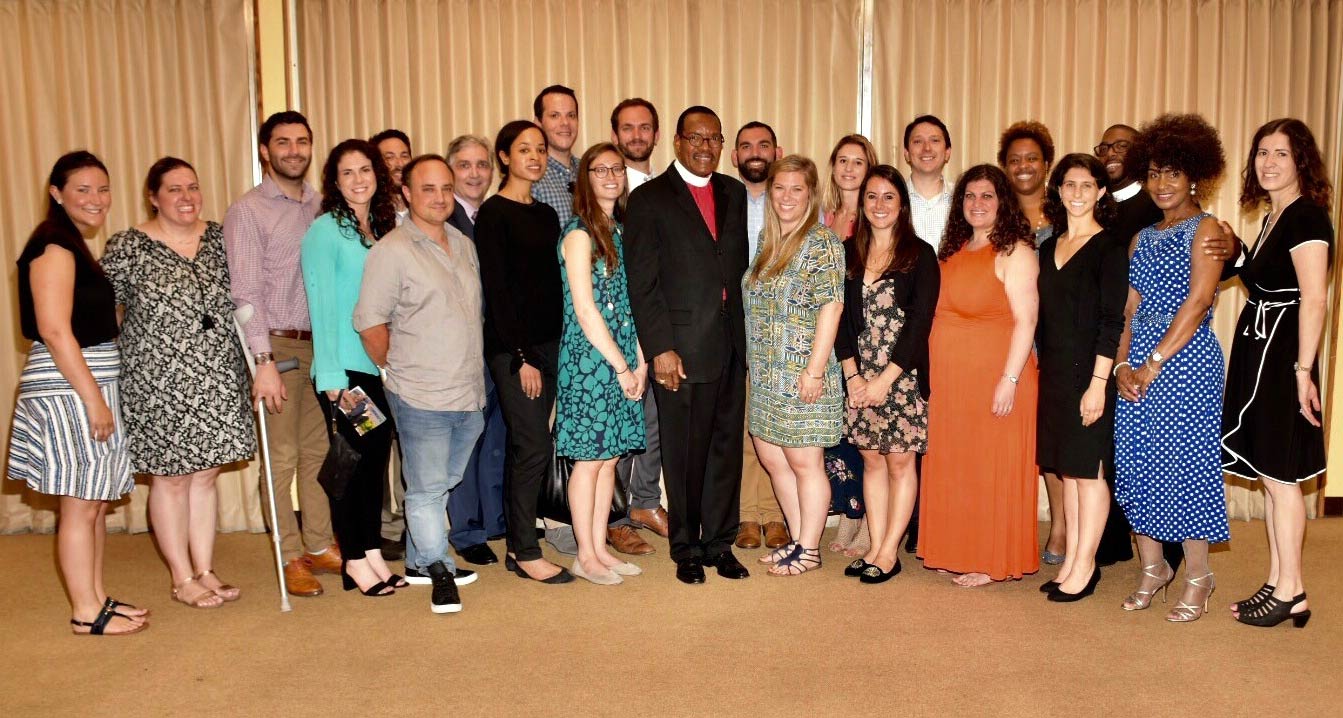 After the service, we were fortunate to have three West Angeles community church professionals come together with us for lunch. We met with Dr. Belinda Allen, Executive Director of WACDC; Elder Donnie Brigs, West Angeles Youth Pastor and Director of Youth Ministries; and Kimberly Briggs, West Angeles Children’s Director. Jonathan Freund, The Jewish Federation’s Senior Director of Israel Education, moderated the panel conversation.

Throughout the conversation, the speakers discussed the services and support they provide for children, parents, families, and the wider community. At West Angeles, they believe it takes a village to raise a child, and that the church is the village. While they provide programming for children, they seek to reach children through parents so that they may provide support to the entire family unit, thereby ensuring support for children and reinforcing to children what parents establish at home. For example, the church offers after-school programs for children, providing them with sessions on the faith, as well as with time to decompress, play games, and eat dinner. According to the speakers, many of these children may not have eaten since breakfast or for the entire day. Simultaneously, the church offers parents a program in which they can discuss parenting issues.

The speakers also described the community meetings the church holds to learn from congregants and community members about their needs. In the spirit of their hospitality, West Angeles provides services for as many individuals as they can, whether or not they are church members. They articulated the three Bs: belong, believe, and behave. In other words, vulnerable individuals will belong first and be welcomed, and the church will strive to meet their needs regardless of faith. Following their belonging, their beliefs in God may shift, followed by a positive change in behavior. Some examples of the range of much-needed services the church provides are: working with homeless to locate temporary housing, tutoring programs for students, and youth leadership development programs. Moreover, to promote self-sustaining families and individuals, the church offers courses on financial literacy, home purchasing and retention, and on launching and staying in a business.

The speakers articulated that what drives them to complete this vital community work is the underlying principle of acting as an extension of God and representing who or what God is to the broader community. I was inspired by and could relate to theses speakers’ motivations, as a parallel concept exists in Judaism, called b’tzelem elohim, a notion that we were all created in God’s image. This idea inspires me in my own interfaith and intercommunity work and was one reason I was motivated to join NLP. The idea of b’tzelem elohim reminds us to treat one another with dignity, kindness, and respect, as if there is a piece of God in all of us, regardless of religion, race, ethnicity, nationality, or sexual orientation. It reminds me that regardless of today’s divided landscape in L.A. and in the broader U.S., there are opportunities to establish connections and discover commonality among those who may not be from our communities or neighborhoods. NLP has had great success in fostering these relationships, and it is a true privilege to contribute to those relationships and witness their impact on the City of Los Angeles.

For over 25 years, The Rautenberg New Leaders Project (NLP) has provided unique opportunities and training to elevate the next class of outstanding Jewish civic leaders in Los Angeles. With a commitment to the Jewish tradition of social responsibility, NLP empowers participants to hone their leadership skills and gain a deep understanding of the diverse fabric of Los Angeles while working with elected, civic, and community leaders to address some of the most critical challenges facing our city. Applications for NLP 2019 will open in September. To learn more about NLP and to apply, visit www.YAJewishLA.org/NLP or e-mail NLP@JewishLA.org.