Rabbi Judith HaLevy, Senior Rabbi of Malibu Jewish Center & Synagogue, was installed as the 36th President of the Board of Rabbis of Southern California, a membership organization of over 330 rabbis from across the denominational spectrum. Rabbi HaLevy succeeds immediate outgoing president Rabbi Denise L. Eger, founding rabbi and spiritual leader of Congregation Kol Ami of West Hollywood, and thus will be the second woman to be president of the 74-year-old organization.

“The Board of Rabbis plays an integral role in the work of The Jewish Federation,” said Jay Sanderson, President of the Jewish Federation of Greater Los Angeles, who offered remarks during the program. “We look forward to Rabbi Judith HaLevy’s inspired leadership as the Board of Rabbis continues to connect our community’s Rabbis and synagogues closer to our work in caring for Jews in need, engaging in our broader community and most importantly, ensuring our Jewish future for our children and grandchildren.”

As part of the bi-annual Installation Gala, held on the Malibu Jewish Center and Synagogue campus on May 16, special presentations were made to the Board of Rabbis Outgoing President, Rabbi Denise L. Eger, as well as to the Hon. Jacob Dayan, the outgoing Counsel General of Israel for the Southwest U.S. Along with remarks and contributions from the Malibu Jewish Center and Synagogue community and the leadership of the Board of Rabbis, and recognitions from civic leaders, Richard Sandler, Chairman of the Board of the Jewish Federation, read the Prayer for Our Country and Cantor Marcelo Gindlin provided the joyful music. 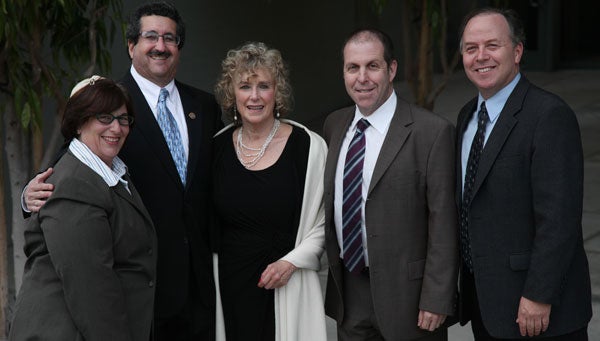 In addition to Rabbi HaLevy, the Board of Rabbis also installed its new slate of officers and executive committee members. In the spirit of the Board’s transdenominational philosophy, the twenty members of the leadership include Conservative, Orthodox, Reconstructionist, Reform and unaffiliated rabbis.

“Rabbi Judith HaLevy is a creative and dynamic rabbi and a passionate advocate for civil discourse in interfaith and interfaith settings,” said Rabbi Mark S. Diamond, Executive Vice President of the Board of Rabbis of Southern California, Jewish Federation of greater Los Angeles. “I am confident that under Rabbi HaLevy’s leadership, the Board of Rabbis of the Jewish Federation will strengthen and deepen its partnerships with our rabbis, congregations and community.”

The Board of Rabbis of Southern California promotes and enriches Jewish life in our community by sponsoring programs of professional growth and development, Kehillah and Talmud Torah (community and learning), Tikkun Olam (social justice), healing and spirituality, interreligious engagement, and Israel advocacy. Find out more at www.BoardofRabbis.org.