The following is the fourth in a series of personal accounts by a participant in Federation’s new Onward Israel program.

Situated in the middle of our southern Tel Aviv residential area, our biggest neighbor here in Shapira is the architecturally and culturally infamous New Central Bus Station. Believe it or not, the building has become our unofficial Onward Israel LA Mascot.

It is located literally around the corner from our apartment and was the first place we went as a group on Day 1 to get our rav kav (bus pass). Every time I travel to and from Jerusalem I take Bus 405, from the station’s 6th floor. As a group we go grocery shopping, buy underwear, bike locks, 40 shekel shoes, and even our house guitar and purple hookah all at the bus station.

You can find it all here.

One Thursday, a group of us even followed up on a Facebook post about a live klezmer show in a Yiddish library located in the station called Yung Yiddish. Using the McDonald’s as a starting point, we followed the printed paper signs labeled “Yiddish” duct taped to the paint-chipped concrete walls, through the maze of the third floor in which every turn felt like the wrong turn, leading us to what looked like an antique store nestled in a dark corner, hidden under the bus tunnels.

The shop door opened up to a room full of thousands of rescued Yiddish books, artifacts, maps, and art displayed on dilapidated bookshelves, resting on top of dusty rugs, somehow nailed into the cracked walls or hanging from pipes under the exposed bus station ceiling. The performance area was 30 artistically-mismatched chairs, couches, and benches facing a set of microphone stands and amps in front of an 8-foot-high wall of books stacked on their sides (reminiscent of The Last Book Store in LA) behind which seemed to be endless dark rows of full bookshelves.

The band, staff, and audience were 30-40 year old hipsters, straight out of a bar in Venice or Silverlake, except instead of folk or swing they were rocking out and grooving to old and new klezmer jams. The whole place shook every three minutes as the buses traveled overhead, the hanging lights swayed, casting dancing shadows, and bookshelves squeaked to accompany the wailing clarinet. I constantly kept asking myself, “Where am I?” We left the show utterly impressed and dangerously curious.

When Mitchell (Onward’s #1 bus station fan) discovered there was a tour of the station, we signed up for the first available slot. We needed to see more of this place, try to get a better understanding of this concrete behemoth-turned-spooky culture playground.

Our guide Yonatan explained that construction was started in 1967 and due to various financial setbacks and architectural changes, the bus station wasn’t opened until 1993. Twenty-six years of construction to open a bus station in a then-45-year-old country. When it was inaugurated, it was the largest bus station in the world (now the second largest) and was built to serve two million people daily despite the fact that the entire population of Israel in 1967 was only two million. The structure now stands seven stories high, holds over 1,500 shops and restaurant spaces, and has a nuclear bomb shelter and abandoned first and second floors. Ironically, the station is neither new nor central — it’s close to 20 years old and is located in South Tel Aviv, in the middle of the minority and immigrant neighborhood, reflecting the identities of the regulars at the station. Yonatan then confessed, “This building is complicated, confusing, and my favorite place in Tel Aviv.”

The original blueprints for a grandiose lobby have been adjusted over the years to reflect an entrance hall filled with small makeshift electronics shops, the original beautiful plans glossed over with clustered flea market chaos.

Yonatan then took us to the busiest part of the station, next to the McDonald’s, and pulls out the infamous MC Escher painting Relativity, of the confusion of magic stairs. He holds it up to the light and as our eyes adjust we can see that it directly mimics the myriad of escalators and stairs of the main center of the station. The place is built like a city with side streets, alleyways and main boulevards leading to town squares equipped with streetlamps and benches. Most of the side streets are empty shops, but then again the majority of shop spaces are empty, giving a creepy feeling of abandonment. We walked by signs that pointed the wrong way, leading commuters in circles or into dead ends. There are signs to a tourist center on the third floor that doesn’t exist and nothing close to a store directory or clear floor map. We walked down a “Filipino Street,” saw a Russian bookstore, arcades, churches, a nightclub, and more. We soon made our way to the blocked off second floor, walking on rubble and broken glass, eventually coming to a deserted six-theater movie complex.

We went through a door our guide hadn’t seen open before and made our way around to an underground bus tunnel that was never finished. The tunnel is now protected by the government. Why? Because it is home to a large community of an endangered species of bat and has been designated as a nature preserve.

Around the corner we entered the nuclear bomb shelter that has the capacity to hold thousands in case of nuclear fallout. Down a dark hallway was a large steel door with a wheel locked handle like out of a navy boat. The door warns to keep out and there is a mezuzah in the corner. As we were leaving, Yonaton told us that it is a live 24/7 army base room that is still used today, another creepy moment that felt like something out of one of the Terminator movies.

We ended our tour going from the bottom all the way to the top, to the 6th and 7th floors where the actual bus station platforms are. I was sent into environmental shock: from desolate, crumbling, silent, grey, and uninhabited to bustling, well-kept, beautifully colorful, loud and with plenty of sunlight. The crowning display of change is on the walls. There is over 1,000 square meters of color, images, and texts that have been sprayed, painted, and stenciled by dozens of Tel Aviv’s greatest street artists on top of the grey concrete. It is part of the non-profit organization 7th Floor Project, whose goal is to transform the image of the station and the community.

My Israeli friends all laugh at my obsession with our station, but I think from an outsider’s view I see something they tend to miss. I see the bus station as a microcosm of Israel and our Israeli experience: the need to prove others wrong and the inevitable inability to live up to such high expectations. The modern reality as a departure from the original vision. Failures producing cultural phenomena, that, when examined, can either be viewed as an eyesore or as a gorgeous display of adaptive humanity.

Onward Israel LA is an opportunity to develop your professional future and build your resume while experiencing the exciting metropolitan city of Tel Aviv. Spend eight weeks in an internship customized to your skills, background, and interests, and explore contemporary Israel with peers from Los Angeles.

For more information, contact Margalit Rosenthal at OnwardIsraelLA@JewishLA.org or (323) 761-8208. 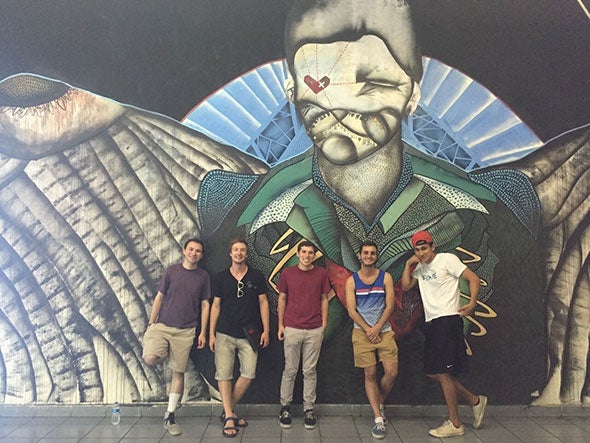